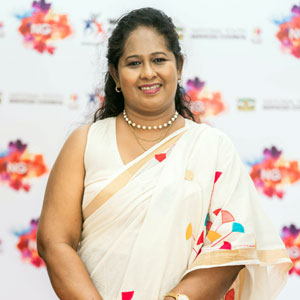 Giving up on a promising career with a multinational company, Dr Sulochana Segera embarked on her own and launched a consultancy firm, which turned out to be a successful operation. Despite the success, the space seemed to be too visible. Her clients turned out to be all male and they were successful professionals occupying the top slots in the corporate world.

Furthermore, having worked as a Head Hunter for senior management, it dawned on her that corporates in general were biased in their process of hiring, which was highly skewed towards men and least in favour of hiring young women or married women with young children. Her training programs were well-attended, but by men. Women had the privilege of participating only if the company had decided to sponsor them. Women were haemorrhaging from the workplace with very little in place to support their professional journey. Witnessing the real-life scenario unfold in her work, Sulochana turned to researching on women and their status and role in the Sri Lankan context. Her endeavour was initiated when the country had just recovered from a 30 year bloody civil war. Women’s empowerment became a common metaphor during this time, which prompted Sulochana to try to understand the meaning underlying the expression that was so commonly used among civil society organisations. Sri Lanka’s response to empowering women, as witnessed by Sulochana was not fitting in her eyes and in line with her expectations. Her effort to gather additional information from women’s organisations that professed to advocate women’s empowerment was even more frustrating given the lacuna in doing justice to the slogan. Initiating her own mission to bring about women’s empowerment, Sulochana embarked on establishing her own network with Singapore and Malaysia in order to study their best practices in women’s empowerment.

She returned to Sri Lanka with a great deal of information and ideas and had by then framed her own thoughts on the course she would take in ensuring empowerment among women. She set the groundwork for an organisation for women; an organisation that would be mentoring women and building networks among organisations to benefit women in careers and businesses. Together with Nilam Samsudeen, she came up with the idea of registering Women in Management as a private institute and not as an externally financed Non-Governmental Organisation. This was indeed a very difficult and challenging decision that was accomplished, given the fact that most women’s organisations were totally dependent on local or international funding. Sulochana believed that self-reliance was the key to empowerment and thus, WIM was launched as a membership driven organisation in 2010. It had only two members. Today, WIM has 2160 members worldwide and is open to all nationalities.

The mentoring program implemented by WIM began by enlisting WIM members who were in top positions in their respective fields of work to mentor women in middle management to be successful in their careers. Not stopping at that, WIM began a journey to the heart of the country, namely the rural areas where no organisation had ever been to. Through its work, WIM ensured that empowerment was not merely relegated to a grand term in gender studies, but put to practice. And today more than 10,000 women from all over the country are connected with WIM.

What is unique about WIM and its programs, which started as a grouping for women, is that they are open to men as well. Yet, WIM continues to stay true to its objective of ensuring that Sri Lankan women will be equipped to step into national and international markets and workplaces as professionals and skilled employees.